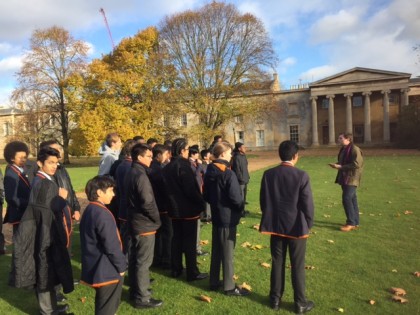 Thirty four of the academy's most able cohort in years 9 and 10 travelled to Cambridge University for a taster day at Downing College. They were given a tour of the grounds and learned about the college's traditions and key influences.

Pupils were then given an admission talk offering advice on options at university, including Cambridge and Russell Group universities. This included:

Once the canteen had been thoroughly investigated by each and every student, one of the current PhD students led a session on Ice Age: A Man Made Climate Change. This provided the group with challenging material, statistical analysis and new terminology, all of which the pupils had to decipher. Although this was a stretch above the academic levels the pupils have been accustomed to, the pupils managed to engage with the speaker and all used this newly acquired content to form discussions which impressed the Cambridge staff.

The tour around the city and other college sites demonstrated the sheer size and impressive characteristics of the university. The tour guides highlighted the various backgrounds, personalities and interests that can be found at the sites and how the university is open to all. "There is not just one type of ‘Cambridge’ person - you can find anyone who likes the same things as you here", was one message.

The university has the most amount of clubs and societies in the country, with room for students to set up their own. The city tour revealed some more historic places and events within the world of research. The students here are studying alongside the world's leading experts, in buildings where the scientific community had been rocked by discoveries such as the  Watson and Crick's double helix DNA strand and Sanger's molecular structure of insulin, along with many others.

The three hour journey back through traffic did not hinder the students' spirits. A lot of the students moved from not believing Cambridge to be a realistic option for the future, to having a clear focus on additional research proposals for when they are ready to apply. Cambridge thanked the group‘s involvement throughout the day and we would like to thank both students and staff for representing the high standards of the academy.