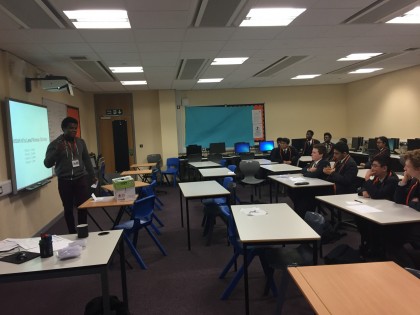 Students learned about how modern democracy works in our country, and the influence the Queen and voters have upon the government. Students then ran their own vote using this system, with both Jordan and Wasim taking the opportunity to try their hand at running for president.

Then Samuel taught students about the Roman system, from over 2000 years ago. Rather than the one-person-one-vote, voting in the Roman empire openly discriminated against the lower classes. Rome was split into areas, according to the class of people who lived there. Votes from people in 'elite' areas counted for four votes, those from 'upper' areas counted for three votes, from 'middle' areas two votes, and from the lowest class just a single vote.

The lower classes therefore had very little impact on the voting system, so politicians only had to appeal to the top classes in order to win the elections. Students then used this system and ran a second vote, with this time Daniel and Rhiyan running for presidency. The results showed that although modern and Roman systems are very different, the qualities voters looked for in their candidates were similar including confidence, trustworthiness, reliability and authority.

Students within the session had a great time and learned a lot of new content at a high academic level. Samuel was very impressed with their engagement and knowledge. Well done to everyone and we're looking forward to the next session.