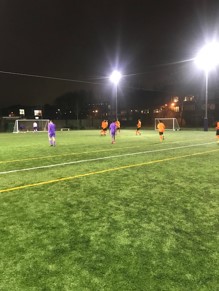 The Year 10 boys travelled to Ark All Saints Academy on Thursday and came out victorious winning 5-1.

ARK were a physical team but we let them know what we were about in the opening ten minutes when we carved open their defence and Harvey slotted home with a neat finish to put us 1–0 up. From there the game could have gone either way, but three fantastic saves from Rayquane in a row gave us the opportunity to go in 1-1  at half time.

We absolutely dominated the second half of the game. Harvey and Mohammed were giving their defence troubles, not giving them a second to rest on the ball. Yayha, Andrew and Mohammed all got on the score sheet with neat finishes.

The defence was solid with Jerry, Esmail and Osmand. The back three dominated all that came their way and allowed the attacking boys to go and make the magic happen.

Man of the Match

Rayquane. Do not let the score line fool you, Rayquane made five or six incredible saves during the game to keep us in it.