The Year 7 football team continued its impressive start with a pre-season friendly against a very strong (St Thomas the Apostle College) STAC team.

STAC, with their support of around 100 students, had a great start tucking away two early goals. After quick adjustment by the coaching staff, HBAED were able to get back into the game quickly. A solid strike from Captain Cosmo got us back into the game and we began to settle. There were some notably strong battles in the first half with Dexter really stamping his mark on the field. STAC continued to press but the back three of Joshua, Allan and Emmanuel were very disciplined and physical.

The second half got underway with HBAED having the sun on their backs and with some superb holdup play from Gody, Dexter managed a great run through STAC's defence to bring us back to 2-2. 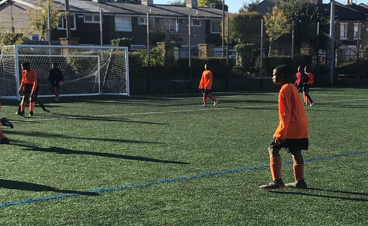 STAC then turned it up a notch by bringing on their Chelsea Academy player who helped them scoop up two more goals even with Joel making a few great saves. Some would have thought at 4-2 up, STAC would have killed off the game but the HBAED Year 7s had the completely opposite idea.

Idris stepped up on the left wing causing some carnage before beating a few men down the wing and pulling it back for Gody who put an impressive 20 yard shot straight into the back of the net. 4-3 and our boys had more in the tank.

Captain Cosmo brought out his true leadership when he pushed himself into a more attacking role and got his second. The last five minutes were end to end but neither side could get the breakthrough. A great game and a great start from Tear 7s who go into a big week of football ahead of their cup games.

Please congratulate the boys and many thanks to the water boy Mr Armstrong for coming along to support.

Mr May, Deputy Director of PE

Man of the Match. Joshua was solid at the back with some incredible last ditch challenges to keep us in the game.

Stepping Up. Idris came off the bench and showed some amazing skills as well as defensive qualities.

Hero. Comso was a hero today. He played centre midfield, right wing and striker. Cosmo didn’t stop running the whole game and scored two crucial goals to bring us back into the game.