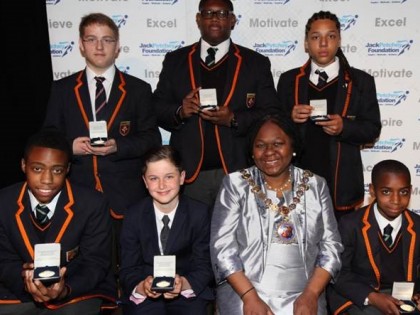 Each student represented the Academy with pride and confidence, and it must be mentioned that we were one of the best-dressed academies there! Please congratulate all of this year’s winners (pictured right with the Mayor of Southwark).

Individual student reports can be found below. Three students were also chosen by the Jack Petchey Foundation for a special report on their website (Tyreece, Alpha and Mark).

The science department were resolute in their choice for January’s outstanding achiever. According to his Science teacher, Miss Gringeri, Alpha was "a standout choice for the award. His attitude to his own learning is second to none, but the attribute that makes him a standout winner is his ability to inspire other students to approach their learning as he does. Alpha has truly embodied the meaning of being an outstanding achiever! Thank you for all your hard work Alpha."

Tyreece Ruddock was nominated by the PE department. Both Mr Butler and Mr Connolly have described Tyreece as "a naturally gifted athlete and a model student. He has a natural confidence that enables him to maximise his learning through self-assessment and practice. His progress in PE has been exceptional and he currently tops the extra-curricular points leader board, having represented the Academy at regional level, as well as at Federation sports day. Unfortunately though, Tyreece is not as well thought of by all. A selection of students from local rival Academies fear his presence on the handball court, as his thunderous shots have known to record around 7 on the Richter scale! None the less, a long, successful career, wherever he may choose that to be, is what is expected of this courteous and hard-working student."

Ben was nominated by Miss Aktah in the technology department. She said: "Ben has demonstrated fantastic determination to achieve an A* in both food technology and design technology. His coursework has shown a tremendous improvement and Ben has shown great resilience when solving technical problems. Ben has also shown a positive, ‘can do’ attitude throughout his work. He is able to work independently and is always happy to assist others in achieving. He has been an absolute pleasure to teach."

Marc was nominated by the humanities department for his work in Geography. He has been identified as "a role-model to the rest of his year group, with a positive attitude and exceptional behaviour. His meticulous, hard-working nature recently enabled him to achieve an A* in his most recent assessment. His work ethic transpires and affects those around him, he is an asset to our Academy."

Mark was nominated by Miss Bayley for his unique leadership skills. Mark has been described as, “a student who undertakes every new challenge with passion and commitment”.

Mark recently planned a session for his peers in mathematics. He demonstrated professionalism and refined presentation skills as he led with confidence and flare.

“This session was truly outstanding”, said Miss Bayley and she hopes Mark will choose a similar profession to her own in the near future!”

Jayden was nominated by Mr Candy and Miss Senior in the drama department. Here’s what they had to say: “Jayden gives 100% in every lesson, he is known by the class as being someone who works hard to achieve and they often turn to him for support in their work, both written and practical.  In our last scheme of work Jayden made outstanding progress not just because he is talented but because he consistently makes every effort to engage with the work he undertakes. A huge well done to Jayden for a fantastic year”.

Sean was nominated by Miss Burke for his contribution to the Academy ethos. She said: "His brave and mature approach to student conflict has not only contributed the safety of the students, but has also made Sean a role model to the younger years. Sean went on to devote his reward money to the playground fund whereby a variety of equipment could be purchased to ensure all students were able to engage in activities throughout the Academy day and avoid conflict and negative behaviour. A huge thank you is extended the Academy staff as Sean’s reward money has been put to excellent use for the greater safety of our students."

Joe was nominated by Mr Brett, the assistant principal, for his "unmatchable thirst for learning. Since starting at the Academy last year, it was not long before Joe’s attitude and work ethic became apparent to all. Among his academic ability, Joe also demonstrated his sporting prowess, and was recommended by Mr Butler to represent the Academy handball team in the South London Finals. After going on to win this event, Joe soon cemented his place as one of the Academy’s young role models, inspiring others to achieve and be successful in all aspects of Academy life."

Roje was nominated by his dance teacher, Miss Price, for his "continued hard work in GCSE dance. Roje’s work ethic has provided a foundation for his year 11 GCSE dance cohort whereby progress and engagement has been amplified. A big thank you to Roje for contributing to this outstanding, working atmosphere. His reward money was used to purchase camera equipment for his GCSE peers to use in their dance practical. With his GCSE results looming, the Academy wishes Roje well and all are looking forward to shaking his hand for all his hard work on results day this August!"