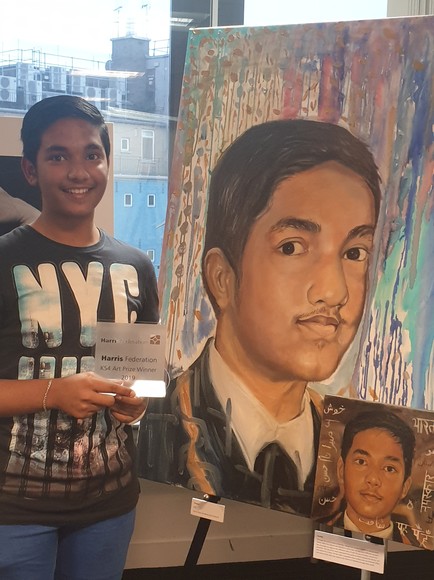 We're so proud of Hassan, who has won the Harris Federation Key Stage 4 art competition.

Hassan has worked hard over the past year perfecting his skills in the art of oil painting. He has been painting to try and capture a realistic effect for his work. The progress in his skill and quality of paintings has been dramatic. He has gone from painting only in acrylic to mastering the techniques in oil painting.

Hassan has created a series of self-portraits which reflect his culture and identity in some way. He has used different perspective of photos to capture the different sides of self. His use of colour mirrors his ethnicity. The size of his work represents the pride he feels towards his family, self and where he’s from.

He has taken inspiration from artists such as Kehinde Wiley and Joshua Suda who also explore the theme of identity through their work.

Hassan is excited to be moving into Year 11, leaving Year 10 with a new independence in painting and drawing.

A group boys in Year 9 have worked hard to complete a pop art style artwork, which will be brought to Christie's art auction on the 17th of July. The piece is about the causes and effects of global warning and creates awareness of our planet's limited resources, and those politicians who don’t help the situation or deny that it exists. 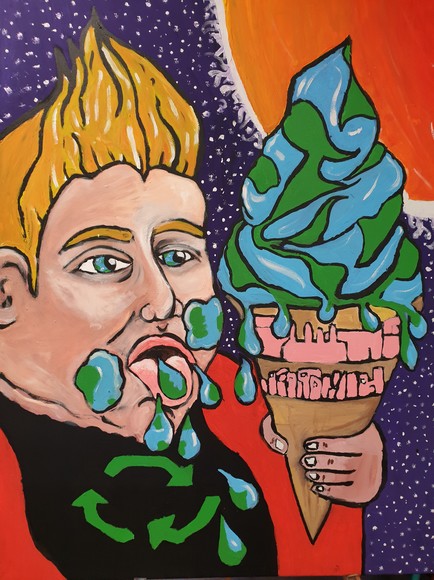