We've noticed great improvements with Bedrock recently. It's fantastic so many students are now benefitting from the repeated reading and vocabulary practise. Our parent guide will help you to help your child(ren) with Bedrock. Download it at https://t.co/BmEomjhqDf https://t.co/xXrEAfzIud

Congratulations to PC Marcus on your award from all the students and teachers at Harris Dulwich Boys. Definitely a most well-deserved award. We are proud to have you on our team! https://t.co/Qs2BPylXgj

School food really matters. Thanks to our staff and Met police officers for helping us provide 400 free breakfast bags for #Southwark children this week. Each bag has two weeks’ of breakfasts. Bags went out on Tues and Weds this week. @MPSSouthwark https://t.co/AwjlkJ492v

HBAED students... do you need more data to help you study? The government has launched a scheme which temporarily increases data allowances for some mobile phone users so that students can access remote education. Click here to find out more and apply https://t.co/jiLFD5e3HK

It's Wellbeing Wednesday so why not complete this full body yoga session today? https://t.co/VjNSsFO3BM. We've a different suggested wellbeing activity for every single day in January in our HBAED Wellbeing Calendar at https://t.co/6TLBvrc75w. Take a look!

Over 2,300 e-books are now available through your school Reading Cloud log in. Click https://t.co/8qjGxjnHyG to start reading. Username is your school email address (initial.surname@harrisdulwichboys.org.uk). Password is harrisboys (you can change this). https://t.co/PIVQI1Weye https://t.co/DygbXOxpXo

@nixie_nix Thanks for getting in touch, Nicole. If you are having problems accessing the dashboard could you email info@harrisdulwichboys.org.uk please? You can mark it for attention of Ms George if you like. We'll then get you the help you need.

We want to boost our students’ vocabulary and Bedrock is one of the tools we use. Has your child logged on? Are they consistently working on Bedrock? How much progress have they made? See your parent dashboard for an insight. Let’s close the vocabulary gap together!

Our Health and Wellbeing Calendar has a suggested activity for every day in January, to help you look after your health and wellbeing. See what's on the calendar today at https://t.co/YjQOUyUVYe https://t.co/hpLWpd0vnz

This week's PE challenge is to complete a 5k run, jog or walk. Mr May has been out and running to set you some 5k times to try and beat, if you want to! But it doesn’t really matter how long it takes. Find out how to take part at https://t.co/hdRLfdWpbs https://t.co/Nu48VhQIek

Thank you to entrepreneur Mark Jenner, Founder of @ridebeeline for his inspirational talk to our Yr 7 boys recently as part of their Active Citizens Enterprise Day. “It was great to to see the boys demonstrate such confidence," he said. Read more https://t.co/vZO9XrCo0H https://t.co/MpxuonVESO

We are pleased to announce that we are committed to achieving the Quality in Careers Standard in 2021. We aim to provide an outstanding programme of careers education, information, advice and guidance to address the career development needs of all our students @QualityCareersS https://t.co/eJZyq7RJf0

Getting this lovely message from a parent made a BIG difference to our day today🙂. https://t.co/W0iaNJNPFW

Covid testing in schools. To see our letter to parents about this national scheme, including the consent form, please visit https://t.co/3ymUT61MVM. Thank you.

Please see our Covid-19 Updates page for the latest details of start of term arrangements. Thank you as ever for your cooperation. https://t.co/dincMb7BT1

We are proud to present our Seasonal Showcase 2020 to show that, despite Covid, the arts at Harris Boys' Academy East Dulwich are thriving! Watch at https://t.co/qNmkKbaSbt https://t.co/K9XcI0uceD

Thanks for the opportunity and congratulations to the winners! https://t.co/TxtcU4nZS7

Prof Martin Marshall, Chairman of the Royal College of General Practitioners, took the time recently to speak to our Yr 9 & 10 aspiring medics. The boys really valued hearing him talk about the impact of a GP's work and his views on the Covid vaccine. https://t.co/b9kyhpOpqV https://t.co/oEkPCjCXFk

The U14 London Youth Basketball games tipped off yesterday at Dulwich College, where our boys emphatically represented the academy with a huge performance.

Clad in the HBAED white-striped shorts and light blue tops, the boys won the first tip, with Sheriff passing it straight to the team’s most skilled player, Bilaal, who immediately set the tone with the first bucket from a 17ft jumper. This got the team motivated from the onset as they pressured Charter’s shaky offense with the half-court man-to-man defence system keeping them out of the HBAED zone with only two points made against HBAED’s 18 at the half. In the second half, HBAED’s offence was led by Bilaal’s court vision and Nathan’s on-target mid-range jumpers supported by Subir’s timely rebounding finishing the game with a mighty 31-3 win.

Picture: Our unbeaten boys after round one. 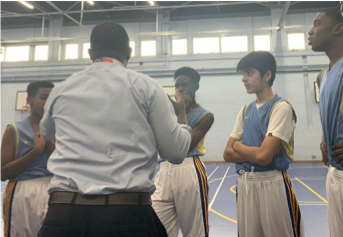 Next up was a tight match up against STAC who had also won their first game. But the HBAED boys had grown in confidence and at this point had built up an understanding of each other's strengths and reflected on the previous game’s mistakes that needed to be addressed. STAC started off with a 4-0 lead which got the boys to focus on denying the opponent the ball. Yacine-Nour led the defence that kept STAC's key player out of the game, allowing HBAED’s offence led by Bilaal’s sharp shooting to get going. Allan’s daring passes got Sherrif, Kalvin and Subir stacking up the points that got HBAED cruising away with a 21-15 win. 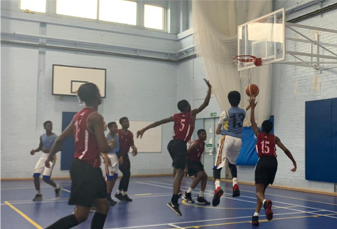 Fully energised from the previous game, it was clear that HBAED’s big men - Sabur, Sherrif, Kalvin - were in rhythm to keep the paint clear and post up on offence against a Compass side that was clearly lacking the required skill to stop them. Nasir stepped up his offence leading all scorers with his signature euro-step that was clearly unstoppable. Jordan’s effort on both ends of the floor gave HBAED a 19-8 lead at half-time. Through good communication on the floor, team effort and  discipline, the boys humbled Compass with the highest points of the day - 51-16.

Picture: Bilal goes up for a 2-point lay up.

Man of the Match: Nathan was fantastic ion both ends of the floor (defence and offence) dominating the mid-range shooting.

Key Player: Bilaal’s court vision and leadership was unmatched throughout all the games making it easier for the boys to thrive over their opponents.