Alex Wheatle, the ‘Brixton Bard’, made his second visit to Harris Boys’ recently. He started the day with Form A1 for DEAR Time (Drop Everything And Read) as they are currently reading his book Liccle Bit.

Students shared with Alex their predictions of what might happen at the end of the book, then listened to the author read the next instalment of the story. Nurain, Year 8, wanted to know why Alex wrote the book and what his inspiration was. Alex said: “It is based around experiences in my life – many things that happen in my books happened to me. I was trying to understand why because you are from one postcode you end up hating someone from a different one. It doesn’t make any sense.”

Aneurin, Year 9, said: “DEAR time with Alex was really good. I enjoyed it when he was reading in patois and acting out the storyline whilst reading the book."

Alex’s books include the Crongton series, specially written for teenagers and featuring instantly recognisable and endearing characters who face problems at home and on the streets. His writing is characterised by fresh, playful dialogue influenced by music, films and different dialects. He explained how he speaks the words out loud to test them out as he writes.

During the morning, Alex told his life story to Years 7, 8 and 9 as well as many members of staff. His dramatic and heart-rending story starts in Jamaica and runs through children’s homes, hostels and reform school, to the Brixton riots and prison. 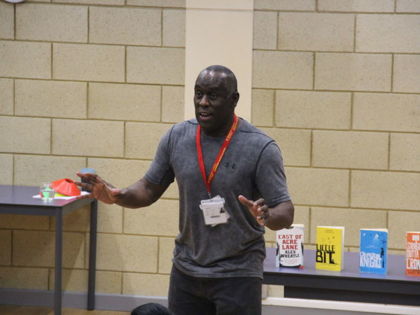 Alex is now a prize-winning author, involved with many charities, schools and young people’s groups and he shared the importance of reading, writing and libraries in turning his life around. He said the most important thing for him was finding someone who believed in him and encouraged him to find out who he was and where he had come from. After listening to Alex, Prashan, Year 8, said he was impressed with how open and honest Alex was in front of so many people.

Students from all year groups chatted with Alex at break time and over lunch in the canteen, wanting to know everything from what happened to all the people in his life story to tips for writing their own stories.

Alex said it was a pleasure to visit our school, how engaged he found the students and how pleased he was with their responses to his presentation. He commented that it was wonderful to be in a school where reading is so highly valued and promoted. Alex has donated £300 worth of his books to HBAED for DEAR Time, after school book clubs and as individual gifts and prizes for students. 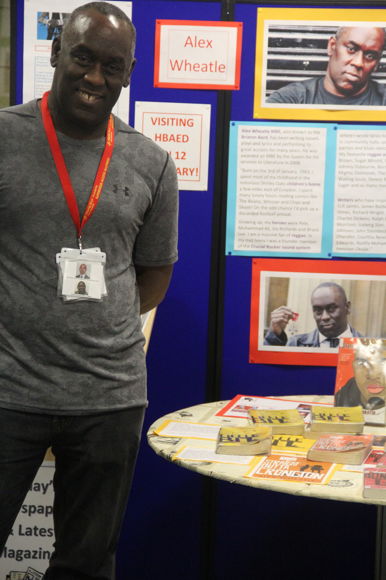 It was amazing to read alongside Alex Wheatle! I hope I get this opportunity again.

Crongton Knights by Alex Wheatle is on at Theatre Peckham 22 April – 9 May and will be blending hip-hop and beat box into the story. Sign up in the library for the school trip or why not book tickets and take your whole family along!