Ms George says: "I can read Margaret Atwood’s writing time and time again. One of the reasons I wanted to study Literature at A-Level is so I could explore The Handmaid’s Tale and I’m so glad I did! Her writing is absorbing and still (sadly) politically relevant #BooksThatMadeMe https://t.co/lD4IR8V5sw

Here are the results of two recent votes that students took as part of their weekly PHSE lessons. Each week we debate a topic and then have a vote on it, as part of our commitment to being #ActiveCitizens. 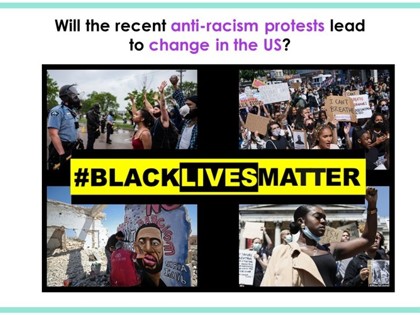 Will the recent anti-racism protests lead to change in the US?

YES - “Due to the significant amount of global awareness this case has received, this case will definitely not be forgotten anytime soon, especially if there is change in United States law.” Jordan

YES - “I think it will because there are already tons of riots and protests and I think at some point the people in power are going to have to give in.” Lucas

YES - “Now that the government has seen what has happened and how others react to it, I think the government needs to start thinking and caring about others instead of always thinking about themselves and their own needs.” Yacine

NO - “I believe that the recent anti-racism protests will not lead to change in the US. This is because racism will always exist and it will be impossible to get rid of because there will always be one group of people who think they are better than others and treat others as if they never existed. Change will only happen when people learn to get along with each other and all the disgusting stereotypes are eliminated from society.” Hamza 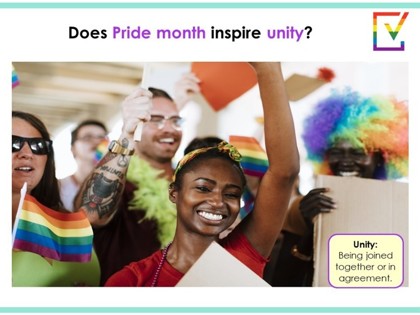 YES - “Pride inspires unity because it is showing that whether you are gay or lesbian or bisexual, you are still the same to everybody else and that should be respected by others. It will also bring unity for them knowing that they are supported and appreciated for who they are.” Faizal

YES - Yes because Pride works really each year to celebrate the rights of LGBT and they also inspire everyone in the world so that is why I think they inspire Unity.” Zhi

YES - “Yes, because as the LGBTQ+ community grows bigger, more people might be inspired to join as allies.” Dominik

NO - “I say no as all the LGBTQ can come together but if parents are ashamed of their children for their sexual/gender identity there is no unity.” Louie