Student historians from HBAED are working with Montaz Marche from @UCL on a presentation which will be displayed before a panel of notable historians at Ironmongers Hall (pictured). A fantastic opportunity! Montaz was very impressed with how much our boys are learning. So are we! https://t.co/u3tg81M1RR

This exhibition pavilion designed by students at Harris Boys' Academy East Dulwich won the @nextgendesign_ldn architecture competition in Feb. Now you can see a 3D version. The pavilion shows the manipulation of the earth by human hands. Watch and marvel! https://t.co/WB0ycZ0gcH https://t.co/gxzvp32073

@SRTRC_England You could not be more welcome!

Over 100 of our boys have been rewarded for their consistently good conduct at special breakfasts with Principal Mr Groves this week. Our boys' conduct has remained excellent this term, with 25,836 points awarded by staff. Well done boys! Find out more https://t.co/ABLH2FwICN https://t.co/Zy2oz49S9U

We are proud to be an anti-racist school and stand united: changing minds and changing lives by being #ActiveCitizens #ShowRacismTheRedCard https://t.co/ws2BDdSaIa

We're continuing our tradition of Principal’s Breakfasts as part of our #rewards programme this year, even though this year they must be in year group bubbles and socially distanced, of course. Find out more at https://t.co/BwGtRonXgU https://t.co/Zt1ZBBnFvG

6th Form Virtual Open Evening, Weds 14th Oct, 5.30pm. Find out how our Sixth Form can help you take the next step towards university, apprenticeships or work. Sign up for this LIVE online event at https://t.co/699o1JeN0W https://t.co/ubzTPloim0

"I’m happy that our school has taken the time to talk about #MentalHealth this week in lessons and that we can wear #HelloYellow stickers today too." Daniils @YoungMindsUK https://t.co/lGd2YNgQL2

This comment from one of our former Year 11 boys has brought a tear to the eye... "Thank you so much for everything the school did to support me and my classmates. The school was like a family to me and I will really miss it."

"As boys, I feel that it’s important to talk about #MentalHealth," says Che. All this week we've been raising awareness of the struggles and sometimes hidden issues surrounding #MentalHealth. Our teachers and boys are proud to support @YoungMindsUK and #HelloYellow. https://t.co/5PNfRU4Gm3

This made us happy🙂 . A comment sent to us by a local #EastDulwich resident: "I just wanted to say how nice it is to see the boys back. It is nice to see them around, chatting and laughing to each other and giving off a nice positive energy around them."

Music industry executive #MervynLyn gave an inpiring #careers talk to Year 10 today on the importance of #resilience and #confidence in helping to realise your ambitions. A big #ThankYou to Mr Lyn from all our boys! Find out more https://t.co/4Dk6fPWfQL https://t.co/eUL37LMaop

To kick off @BhmUK, 30 of our students interviewed Baroness Wheatcroft of @UKHouseofLords. They asked a range of probing questions around equality & diversity, raising achievement, global warming, the police and gender. Very proud of our boys' professionalism... https://t.co/dKoWMjtGwi 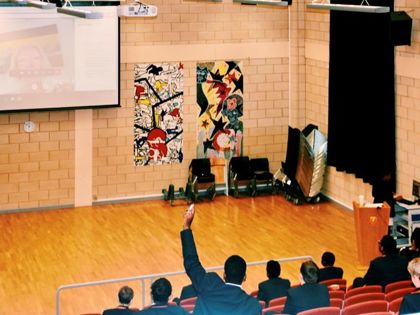 It was part of a House of Lords programme that sees members taking part in virtual visits to schools and colleges across Greater London.

We were all so proud of their professionalism... watch out parliament, the future politicians are likely to be from HBAED!

Baroness Wheatcroft said: "You are such engaged gentleman and I will tell you all this: take advantage of any opportunity that comes your way... even if it’s something you had not previously considered."

Students have been personally invited to visit Parliament once it has fully re-opened - an opportunity they’re all very much looking forward to!

What our boys said...

"I couldn’t believe somebody from The House of Lords answered my question! She was passionate about injustice and reassured us that people in Parliament were working hard behind the scenes to make the world better." Leyon

"We asked a question about ‘Stop and Search’ and all clapped when she answered!" David

"I researched her before as I wanted to hear her views about the environment. It was such a useful meeting!" Hector

The virtual visits are part of the “Learn with the Lords Online” programme and encourage two-way conversations about the role and function of the House of Lords.  As well as hearing the views of our boys on their perceptions of the House, Baroness Wheatcroft will also answer questions about other aspects of the work and role of Parliament.

"We're delighted to have this opportunity for our boys to learn about the work of the House," said Principal Peter Groves. "We're all about encouraging students to be Active Citizens. Understanding how democracy works is very important to that, so meeting Baroness Wheatcroft is a great opportunity."

Baroness Wheatcroft is a British journalist and life peeress, who was editor-in-chief of The Wall Street Journal Europe and previously editor of The Sunday Telegraph newspaper.