Democracy in action today at Harris Dulwich Boys as we elect our Student Leadership Team. Best of luck to all the candidates! #Democracy #BritishValues https://t.co/EhgLortm9u

“Being part of this programme could enable me to get into Oxford or Cambridge...” Our boys are really looking forward to the @HFexperience programme this year. #ActiveCitizens https://t.co/NHHkaNZ1yw https://t.co/YVorqBeRvD

This week our boys are hearing about #BritishValues and our focus on #equality and #diversity. Our student leaders will be driving our focus on equality this year. We look forward to working with them to make positive change in our community. #ActiveCitizens

Our first #ActiveCitizens assembly focused on #StudentLeadership and #ExtraCurricular clubs. All this term we're looking at #resilience. Thank you to Khallum for his sensational #drumming at the assembly. List of clubs at https://t.co/brmDh7YK9K https://t.co/0By1chcyz0

All our #ExtraCurricular clubs are now up and running. #TableTennis got off to a fantastic start with over 50 boys coming along. See a complete list of our clubs at https://t.co/brmDh7YK9K https://t.co/jL7gDOdt5m 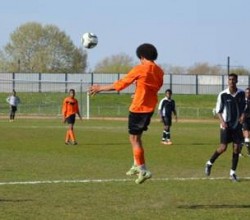 Yesterday, the Year 10 football team played against Harris Crystal Palace in the Federation Cup Final at Croydon Arena. The game had been billed as the biggest game of the season and the boys were raring to go when the whistle was blown at 4pm.

The game got off to a scrappy start, which wasn’t helped by the rock hard pitch. Nevertheless, HBAED got the ball down and tried to play football. The same couldn’t be said for Crystal Palace, who were more than happy to send the ball long at every opportunity. However, Michael and Bilal put in some solid early challenges, letting the opposing strikers know that they were going to be in for a tough game.

Midway through the first half, Josh and Reece began to dictate the middle of the park, allowing the first clear cut chance to fall to Amjad. However, he failed to show the desired composure and the chance went begging. Crystal Palace did eventually try and play the ball on the floor, however, Peter constantly thwarted any attacking threat. Peter was disciplined in his defensive midfield role, allowing Josh and Reece to push further forward, creating more chances for Kevell and Amjad. Frustratingly, neither striker really tested the opposing keeper before the half was up.

Following a stern half time team talk, the boys began the second half in determined fashion. A change in tactics, with the introduction of Marcus on the wing and Bilal up front started to cause all sorts of problems for Crystal Palace’s defence. Momentum was building and it was surely only a matter of time before the deadlock was broken. 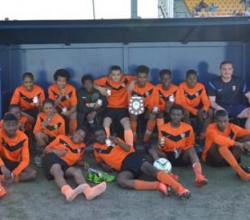 After some good build up play in the centre, Marcus was set free down the left wing, with pace in abundance he headed for goal. With the crowds and Crystal Palace’s defence expecting a cross, Marcus produced a deft Cruyff Turn, his right foot being chopped from under him in the process by the overeager full-back. The referee duly pointed to the penalty spot.

Another change in tactics, meant Bilal moved back into defence, shoring things up for the East Dulwich boys. As Crystal Palace grew frustrated, some big challenges began to fly in. Instead of losing their heads, East Dulwich rose above it and continued to play football. Peter, Reece and Josh continued to show discipline and excellent composure on the ball, allowing the team to see the game out with no real problem.

Man of the Match – Peter – Worked tirelessly for the whole game, disciplined and solid. Impressed in centre midfield and at centre back. 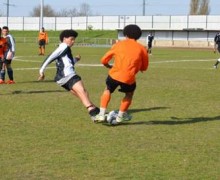 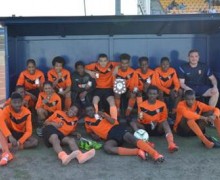