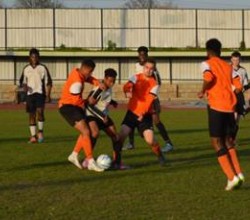 Following on from the Year 10 victory in the Harris Cup final on Wednesday, the Year 11 cup final game kicked off on Thursday.

Once again, the opposition was Harris Crystal Palace and the boys were hoping to inflict further heartache on them. This would be the last time the highly successful Year 11 team would play together, so everyone involved was hoping for a fairy tale ending.

The game got off to a frantic start with both defences being tested early on. The pressure of the cup final clearly getting to the players, resulting in some wayward first touches. Eventually the pace of the game settled down and East Dulwich’s prowess started to prevail. Ethan was dictating play in the middle of the pitch, proving what an influential player he has been all season. Josh M, playing in his second match of the evening, showed no sign of fatigue and was linking up nicely with Ethan.

Despite the battle in midfield consistently being won by East Dulwich, no clear cut chances were created and the typically ruthless talisman Alex O, was struggling to make an impact. With East Dulwich loosening their grip of the game, Crystal Palace’s confidence grew. After a 50/50 ball was won on the edge of the area, Crystal Palace’s striker with back to goal went to ground after a grappling match with the imposing Victor. To the dismay of the bench and the spectators, the referee hesitantly pointed to the penalty spot. Their striker thumped the ball into the bottom right corner, giving Crystal Palace an undeserved lead. 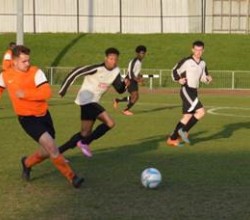 Following the goal, many were expecting an East Dulwich backlash, however Crystal Palace maintained the pressure and East Dulwich were lucky not to concede a second penalty. Kenny showing too much vigour in a tackle, taking the striker and none of the ball. To everyone’s surprise the referee waved play on. There was hope this would be the stroke of luck that East Dulwich needed to get back into this highly contested game. Before the half was up, Crystal Palace had a further chance and if it wasn’t for Brandon producing an outstanding save, East Dulwich could have been in real trouble.

The second half got underway and East Dulwich looked like a new team, Crystal Palace were camped in their own half. A tactical change in formation to 3-5-2 allowed Dre to push forward and he constantly asked questions of their full back. Chances came thick and fast. Firstly, Bilal showed great pace down the left wing before cutting back and bending a shot that look destined for the far corner, only to fly agonisingly wide of the post. The next chance fell to Ethan, following an excellent cross, he rose above the Crystal Palace back line before sending a crisp header back in the direction it had just came from. Once again, the ball falling just the wrong side of the up right.

Josh M continued to pull the strings in central midfield, and the introduction of Reece only strengthened the East Dulwich midfield. Josh K and Ethan were enjoying more time on the ball, allowing them to get into some dangerous areas, yet the final ball was still lacking. The diminutive Elijah was introduced, in the hope that his quick feet could produce that bit of much needed magic. Surprisingly, it wasn’t Elijah’s feet that caused the Crystal Palace goalkeeper problems, it was his head. Following an excellent cross to the back post, Elijah rose highest, however the Crystal Palace keeper produced a fine save low to his right, keeping the score at 1-0.

As the game entered the closing stages, East Dulwich kept up the intensity in the Crystal Palace half. When the ball did break, the ever-reliable Tariq and Yibala were quick to thwart any danger. Crystal Palace had now resorted to having 10 men behind the ball and were beginning to frustrate the East Dulwich team. Further chances fell to Reece and Ethan, neither really testing the keeper.

Much to the disappointment of the East Dulwich players and spectators, the referee blew the final whistle and the Year 11 boys undeservedly lost 1-0. Heartbreak etched across the boys faces as they left the field of play. East Dulwich knew they should have won, but today it wasn’t meant to be.

Special mentions must go to Reece, Bilal and Josh M who played in both Year 10 and Year 11 games, showing great fitness and commitment in doing so. It must also be noted that even though Josh M is in Year 9, he was one of the better players in both games.

Man of the Match – Ethan – Battled relentlessly in centre midfield for the whole game. Showed great work ethic and commanded the team from the outset.