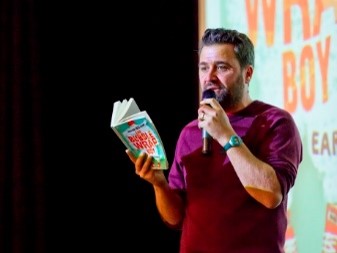 We're delighted that author Phil Earle is visting our academy on Tuesday 30 January.

Phil Earle is the author of nine books – four for younger children and five for young adults, including Being Billy, Saving Daisy and Mind the Gap. His books have won several awards and he has been shortlisted for many more including the Carnegie Medal and the Waterstones Children’s Books Prize. He writes about hard-hitting topics including war, grief, gangs, drugs and mental health issues, but also about friendship, families, football and skateboarding.

“I never wanted to be a writer growing up," says Phil. "I wanted to be a professional footballer for the mighty Hull City. Sadly this dream was ended by a tragic addiction to Mars bars and bags of Frazzles. I hated reading novels as a kid, but discovered a love of comics and graphic novels (anything from Batman to Maus).

"The best thing that ever happened to me though, was getting a job in the children’s section of a bookshop. It was the best move of my life. The books that were shoved under my nose were quite unlike anything else I had read, and quickly I found myself reading nothing but children’s fiction. It was also whilst working as a bookseller, that I realised I wanted to try writing for young people.”

Why not read one of Phil’s books before his visit? Come to the library to find out more.

As well as speaking to students in the assembly hall about his life and writing, Phil will be meeting members of Year 9 and 10 Book Club during DEAR (Drop Everything and Read) Time and will be in the library at lunchtime to meet with all other students.